I'm currently researching to setup a game scenario based on a battle fought during the Polish-Swedish War of 1626-9. The one I've chosen is the battle of Wallhof in 1626 - described on Wikipedia here - https://en.wikipedia.org/wiki/Battle_of_Wallhof.

There are two alternatives for the size of the Polish army. I'm going to opt for something between the two. For troops for each side and their initial positions I'm going to use the nice engraving shown on the Wikipedia page. The following is part of full image with highest resolution, downloaded from here https://commons.wikimedia.org/wiki/File:Slaget_vid_Wallhof_1628_SP230.jpg 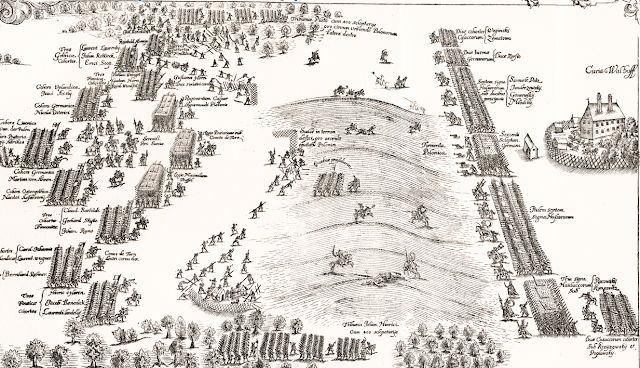 By zooming in on the original high res image you can see the nominal units and commanders names. The Polish side will have cossacks (or light cavalry), winged hussars/pancerni, haiduk infantry and German infantry & Reiters - a nice mix.

I'll use my Polish Army and various units from my Pike & Shot collection to represent the Swedish and the German troops fighting with the Polish.