Sir Warwick Hunt, commander of the parliamentary forces laying siege to Wardour castle mounts his horse after finishing his breakfast and gets ready to direct an assault on the outworks of the castle. 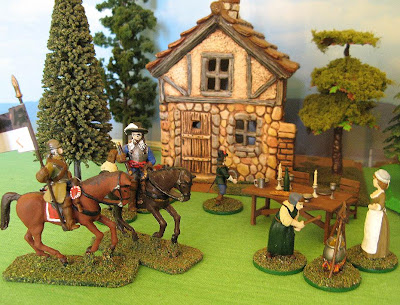 Attempts with artillery and mortars have failed so far to provide any results; his miners are still digging tunnels. His main weapon the big siege gun has still not arrived; impatient he orders his foot regiments to prepare for an assault ... 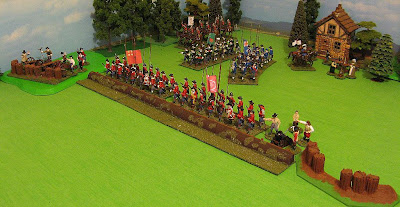 The whole of the royalist garrison get ready to defend the outworks against the oncoming assault; the foot regiment has been reinforced by some dragoons and some horse who have dismounted. 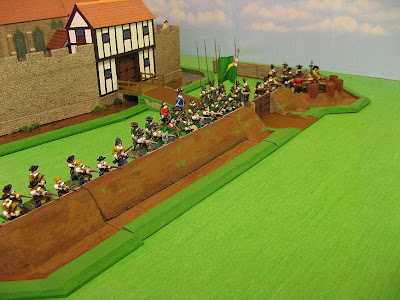 The parliamentary artillery battery opens fire; its main target is the gun near the castle outworks gate - the aim to destroy it or reduce its fire as the assault goes in ... 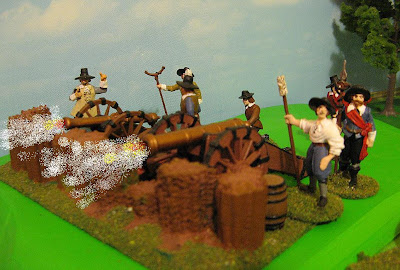 The first wave of the assault forms up and approaches the outworks ... 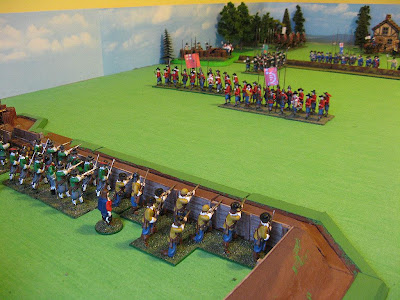 The heavy mortar prepares to start firing, they aim for castle gatehouse and the gate in the outworks .... 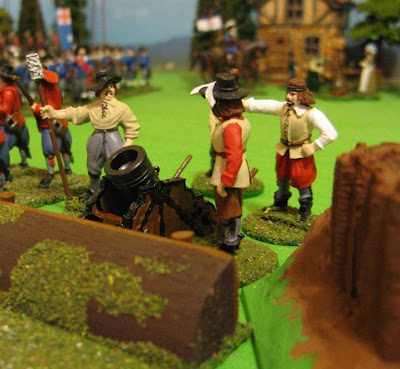 The first wave of the assault reaches the outworks .... 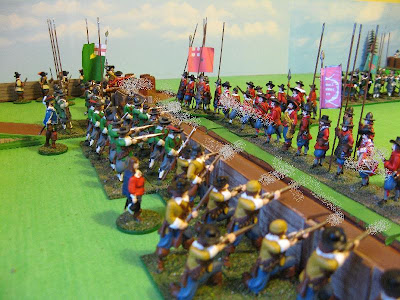 The parliamentary foot take heavy casualties but cross the outworks forcing back the defenders ... 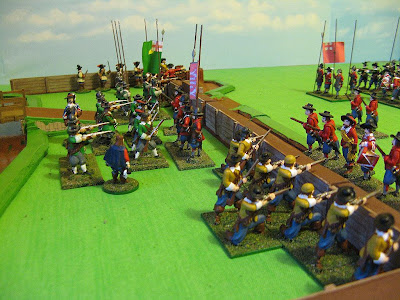 The large siege gun arrives and they set it up, it may be needed if the assault fails ... 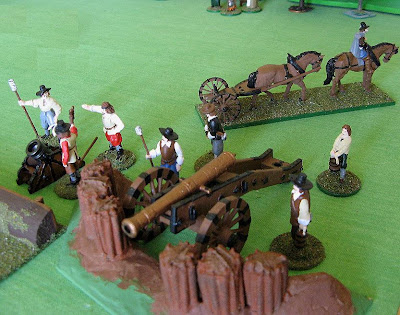 The royalists have repulsed the first assault, hovever the second assault wave arrives and an attack is made on the outworks gate .... 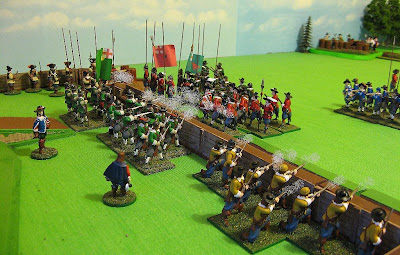 The gate slightly damaged by mortar fire gives way under the sheer weight of numbers and the parliamentary foot gain the outworks, the royalist foot retire towards the gate house. The dismounted horse troopers lay down their arms, the dragoons prepare to fire ... 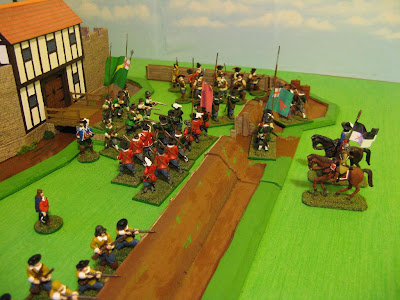 The garrison commander to surrenders to Sir Warwick Hunt; the outworks have fallen, his troops are laying down their arms and he has no alternative. 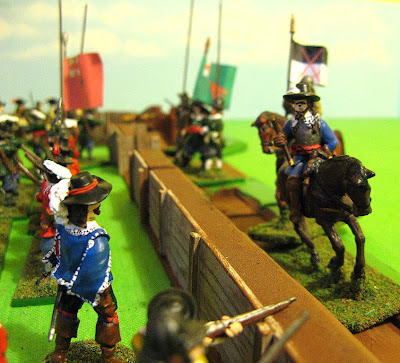 --00X00--
End notes:
1. My model of Pokesay castle is 'masquerading' as Wardour.
2. Historically Wardour Castle, fell to parliament in May 1643 - see http://en.wikipedia.org/wiki/Wardour_Castle.
Posted by old-tidders at 10:52 6 comments:

At last I've finished painting the dismounted horse troopers, below are both of the horse regiments .. 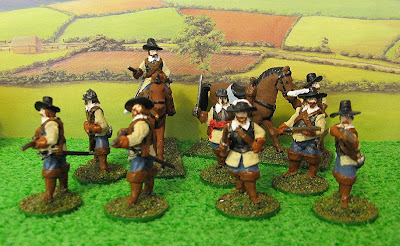 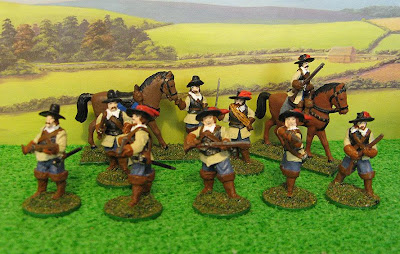 One of these will be off to help defend Wardour castle.
Posted by old-tidders at 06:04 3 comments:

A rather large town house ! 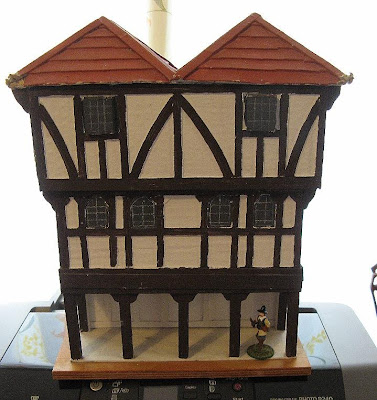 I bought this beastie at my local 'car boot' sale for the princely sum of £2. Although probably in scale for 40mm figs its a bit on the large side. Its made of cardboard and can be carefully (?) cut up, my plan is to make separate buildings of the top two stories and maybe do something with the remnants of the ground floor.
Posted by old-tidders at 05:58 2 comments:

On to Wardour - Skirmish at Barford

The parliamentarian commander Sir Warwick Hunt leads out a regiment of foot from their quarters in the cathedral close, via the high street gate. They will be joining the troops marching to make siege at Wardour castle to the south-west. 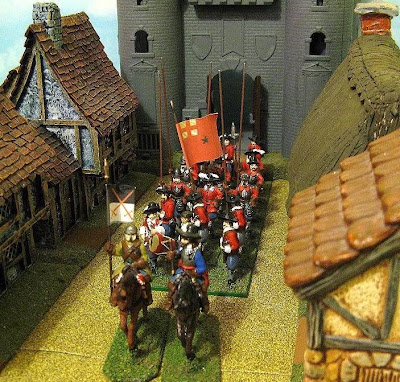 The route to Wardour to crosses the river at Barford St Martin, an outpost of Royalist dragoons is stationed there. 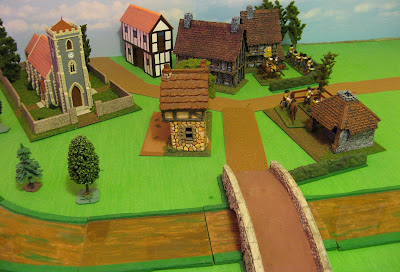 Two regiments of parliamentarian horse approach Barford, they have been ordered to take and hold the river crossing.. 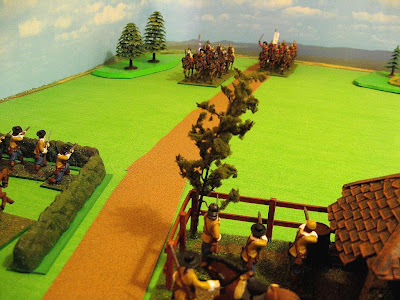 The parliamentarian horse attempt to charge into the village but are held off by steady fire from the dragoons. 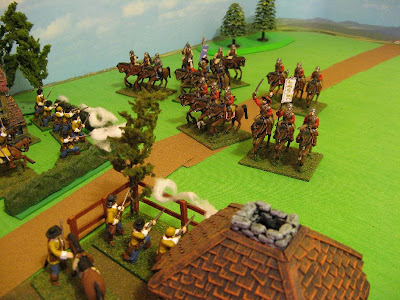 The parliamentarians regroup. The commander of the horse waits for a regiment of foot to arrive before making another attempt to capture Barford. 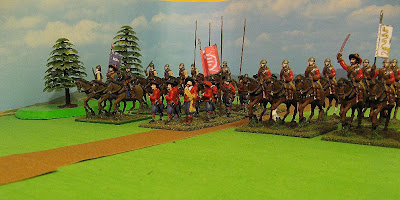 The royalist dragoons seeing the arrival of the regiment of foot and other troops marching in the distance decide to withdraw and get word of the approaching column to the commander of Wardour castle. 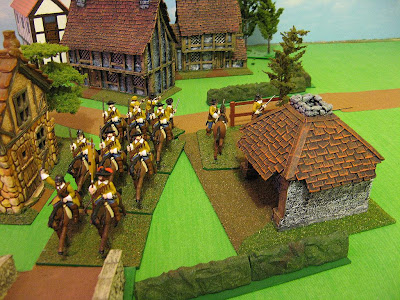 The commander is making preparations for a siege, the gate in the outworks is being re-inforced. 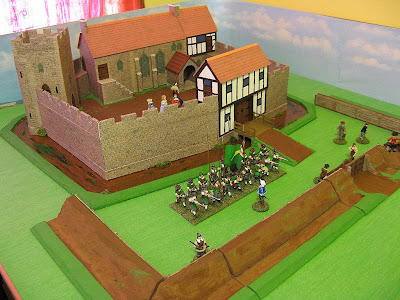 The commander reviews the regiment of foot which is the main part of the garrison. 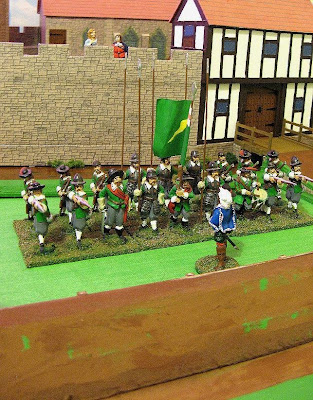 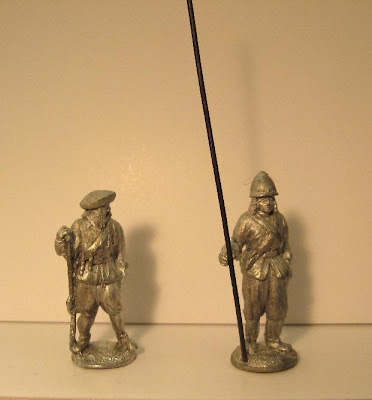