Uniforms and Flags - for Wittenberg

I've started looking at flags and uniforms for both sides. Initially I decided to focus on Wittenberg, being based on Saxony, the excellent little booklet by Jean Belaubre is very useful - shot of front cover below 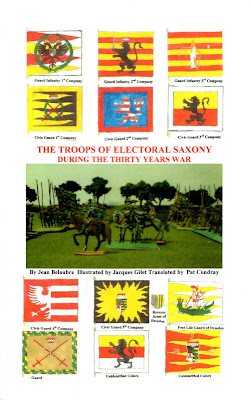 this has enough info and flags for me to set out a rough list of units. I'm aiming for 6 foot, 6 horse and 1 dragoon regiment, plus the kings lifeguard.
Posted by tidders at 06:25 1 comment:

Here are a couple of pictures of the finished coach... 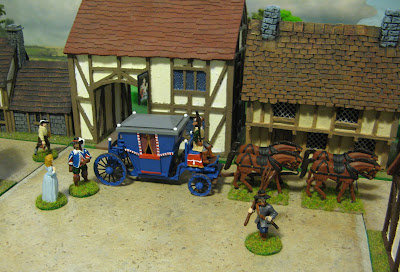 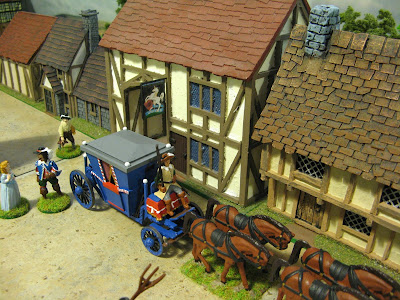 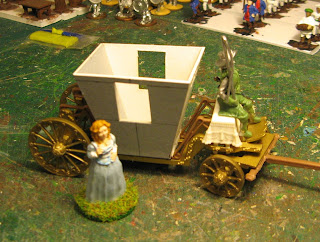 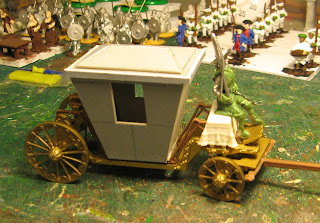 Detailing, with some strips and pieces of cardboard; plus some round pin-heads. All done ready for painting, shown below with some horses from Irregular Miniatures 42mm marlburian range.

Not having an appropriate coach for the period I decided to make one. As a basis for my model I chose the a Dinky 'Slipper and the Rose' coach. These are quite nice and with a paint job would be quite appropriate for an 40mm 18C coach. 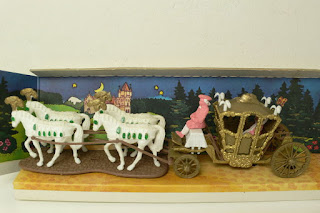 I bought a cheap one on Ebay and took it to bits; leaving me with the parts I wanted - the chassis and wheels

Before starting on building the new coach body I made up a driver using a 18C 40mm self-cast Creartec cuirassier as a dolly. A new head from Sash & Sabre and lots of green stuff ..... 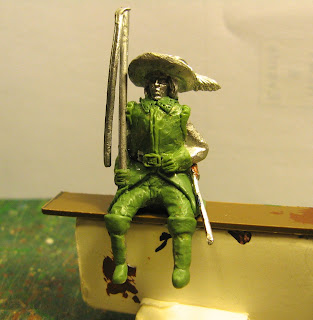 Have completed the main personality figures for each side, now ready to lead their armies 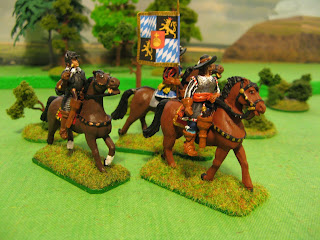 The King of Wittenberg - Leopold I (in the blue) 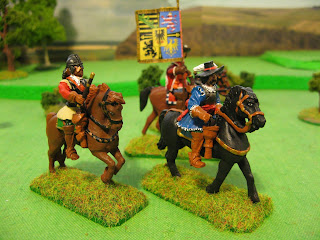 I hope to base the armies on historical counterparts if possible (providing I can find suitable reference material - uniform details and flags). At the moment provisionally

Have started work on the the main personality figures. I bought the Sash&Sabre ECW two command figure pack to use for the Kings, using a different horse for one of them; and tweaked a couple of other figures for the captain generals and standard bearers 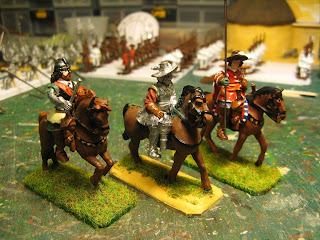 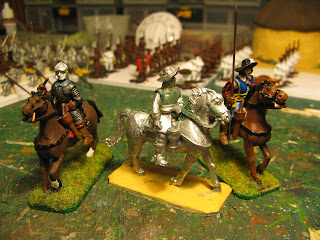 While sorting through figures I found I had four officers with swords that could maybe be suitable for 'the musketeers'. 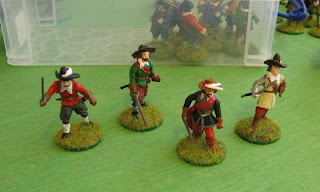 Will need to have four equivalent mounted figures as well though - will have to check what spare riders and horses I have left.

In terms of units I have decided to tweak the sizes slightly
- horse: down to 8 figures, mainly to get more units on the table
- foot: 12 musket (down from 16), pike block of 12 comprising 8 pikemen, 2 ensigns, drummer,  officer with partizan and colonel of foot.