After their defeat at Wrinkleham the parliamentarians continued to recruit men to their standard. Sir Warwick Hunt, having the county trained bands under his control decided to try and give battle again to the Royalists.

Meanwhile Sir William de Willoughby royalist army had received some reinforcements so he moved down the valley from Wrinkleham and was on his way to Chipping Creaseton. Near the river crossing at Hoveton the two armies met ....

Using the river as a secure flank both sides deployed ready to do battle. Two views of the initial deployment - royalists at the back of the table, parliamentarians at the front. 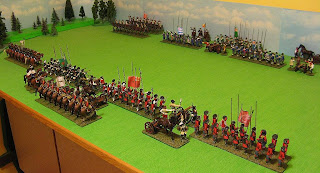 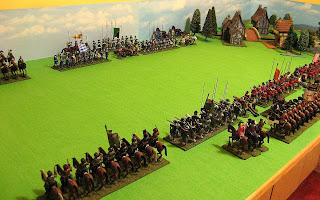 The parliamentarian left flank was the focus of the battle, where the bulk of the cavlary was deployed. Firstly the two royalist horse regiments. 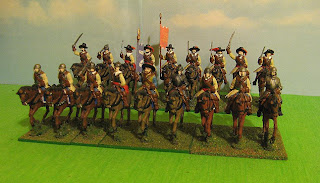 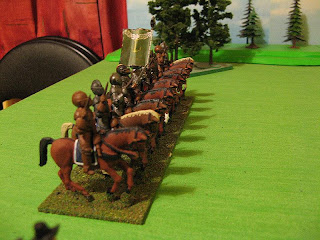 The cavalry moved forwards and the infantry did so as well ... 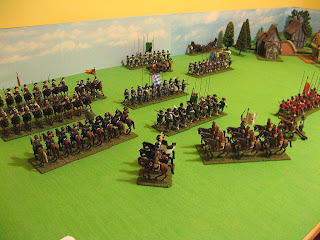 The cavalry melee is joined, the Cuirassier smash into the royalist horse .. 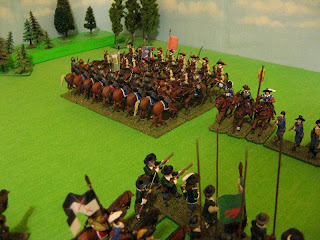 the Royalist horse recoiled, but manage to do so in reasonable order. 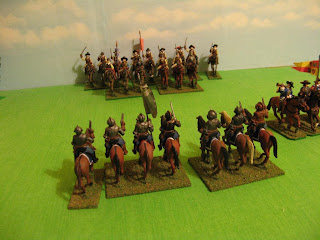 The nearby royalist foot regiment rout after a stiff volley by the parliamentarian foot and the presence of the cuirassiers on their flank. 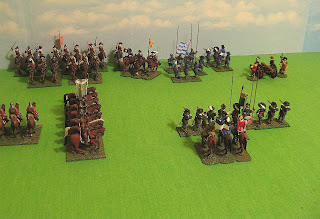 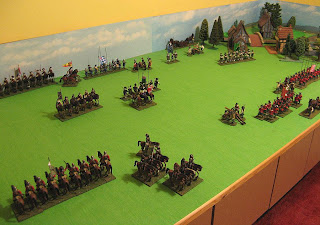 The battle hangs in the balance but both commanders decide to withdraw, the royalists as their foot regiments have had enough fighting for one day, the parliamentarians concerned about the larger number of royalist horse remaining.
Posted by old-tidders at 14:45