A map of the Hoflandt... 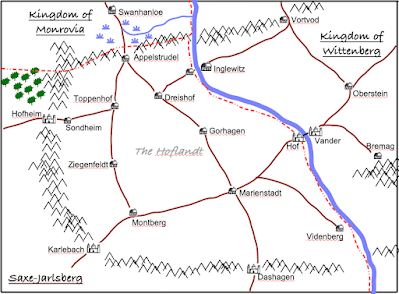 Wittenberg will be attempting to seize control of the area from Saxe-Jarlsberg, who will call on its allies (Monrovia and Hesse-Limburger) for assistance.

Wittenberg has already seized Hof on the opposite bank of the river from Vander, to provide access into the Hoflandt for their troops.  (see https://cavalierecw.blogspot.com/2022/05/square-dancing-in-hof.html)

The Saxe-Jarlsberg garrison of Hof has fallen back to Marienstadt and has sent word to the capital. It will take time for Saxe-Jarlsberg to muster their forces.