The fictional Wiltshire/Hampshire ECW campaign now comes to a close. The battle of Tufton in effect was a deciding engagement.

After 8 years of this blog focusing on the ECW I've decided it is time for a change. I've found the campaign to be most enjoyable and have re-fought two historical battles and associated actions,
plus all the local back and forwards between to the two sides. The final phase of the fictional campaign events dovetail into the historical timeline for October 1644 rather nicely - historical events in italics:

October 14th: Battle of Tufton
October 15th: The Kings Army arrive at Salisbury (aka Sarisbury), returning from the campaign in the west country.
October 16th: Sir Warwick Hunt having withdrawn to Stockbridge to reform after Tufton, hears of the approach of the Kings Army - he sends his brother Herrick Hunt with a regiment of horse to join Waller's army and takes what is left of his command south-west to Romsey.
October 17th: Hurstbourne Manor capitulates to the royalists after the gatehouse is mostly destroyed by artillerie fire. The manor house is slighted - the curtain walls being blown up.
October 18th: The King's Army reaches Andover,  where a skirmish occurs with Waller's rearguard.
October 19th: The King's Army reaches Whitchurch
October 20th: Sir William de Willoughby and his troops join the Kings Army
October 21st: The King's Army reaches Kingsclere
October 27th: The Battle of Newbury 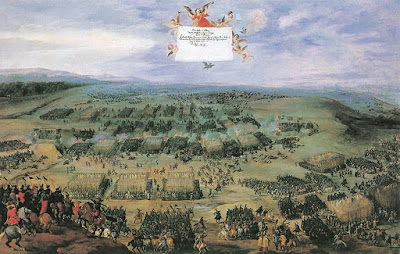 
The blog will continue with Pike & Shotte but in a different setting.  The ECW collection will be re-used and re-purposed for a contest between two Imagi-Nations set somewhere in central Europe just after the thirty years war - sometime about 1650.

An opportunity for some swashbuckling - somewhat like the four musketeers. Maybe something a little different as well - a Polish army with winged hussars ?

So I'll be tinkering with the blog layout/look slightly and will post a starter for the post-TYW in due course.
Posted by tidders at 05:23