Some comparisons between figs received recently .... 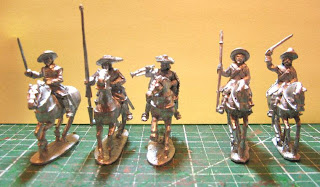 Firstly horse; 3 figs on the left are the Sash and Sabre (S&S) command pack without the pistol holders; 2 figs on the right are Irregular Miniatures (IM) guidon bearer and trooper with sword up. S&S horses are slightly smaller but more rounded; riders for both manufactuers are about the same size although IM riders don't fit well on S&S horses. S&S figs need some assembly; stick on pistol holders, heads and alternative hands [I felt that the S&S pistol holders were set too low on the figure, so I put mine on a bit higher up].

Now the foot; 3 figs on left are from the Romanoff Miniatures (RM) command pack; 2 figs in the middle are Irregular Minaitures (IM) officer and drummer; 2 figs on the right are Sash and Sabre (S&S) artillerists (sorry haven't got any command figs to hand). As you can sees all are broadly compatible in size apart form the S&S ones which are slightly smaller.
The RM figs need assembling - stick on arms, heads and swords; I found them a bit tricky to put together - although I expect I would get better with practice. I found the RM drummer from the command pack difficult to assemble; the drum is a separate casting and getting the fig to balance standing up was difficult.