I've been doing some conversions on my stock of spare castings to make up a couple of new sets of four musketeers figures - one armed with muskets and the other horseback;

the new set armed with muskets 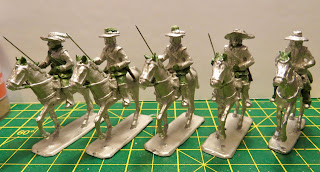 the two new sets will be on normal style rather than clear bases - as they will be used mostly in skirmish style games in association with other figures.
Posted by tidders at 06:40