Somewhere in Europe just after the Thirty Years War

Waldemar IV the Elector of Baumberg,  had managed to keep his country intact during the thirty years war that raged across Europe.

On his death late in 1648,  the country was split into two, between his sons Leopold and Klemens, as stated in his will.  The Elector's chair was inherited by the eldest son Leopold. To avoid a damaging civil war a meeting of the Landsraad was called to ratify the will and create a treaty to define the new kingdoms. 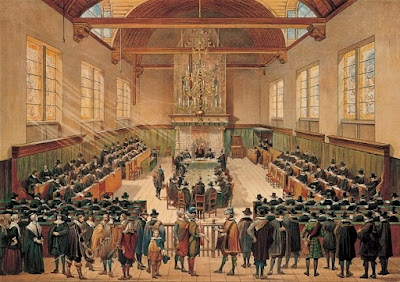 The country was split along the line of the river Oudear which ran through the province of Belgravia.  Each Kingdom was given control of an even number of cities which controlled the crossings of the river. The new Kingdoms were:

After a couple of years the new kingdoms had settled down and established themselves. However both kingdoms asserted claims to the whole region of Belgravia, each stating that it belonged to their kingdom; control of the trade route of the river Oudear was behind these claims.  Even after the depredations of the thirty years war these two small Kingdoms were prepared to go to war to settle the matter. Both sides commenced organizing their armies, although neither side wanted at the moment to make the first agressive move .....

[ for my post-TYW Imagin-Nations I've wound back the history of Wittenberg to the partition of the original Electorship - quite handy as I can re-use all the maps and place names from  18C blog]
Posted by tidders at 04:48