After a rearguard action at Rowde on Sunday, late that evening the Royalist army entered Devizes (campaign map).

---oXo---
The next day the ordnance was taken into the castle via the postern gate ..

Meanwhile barricades were erected across the roads into Devizes... 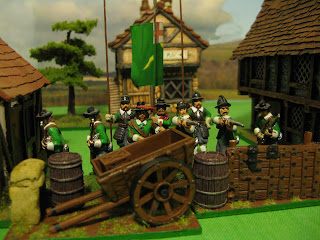 Waller had drawn the main body of the Parliamentarian army to the north-east blocking the road to Marlborough (on the way to Oxford).

In Devizes Hopton held a council of war in the evening where it was decided that the horse should break out and seek aid from Oxford.
Posted by tidders2 at 12:16